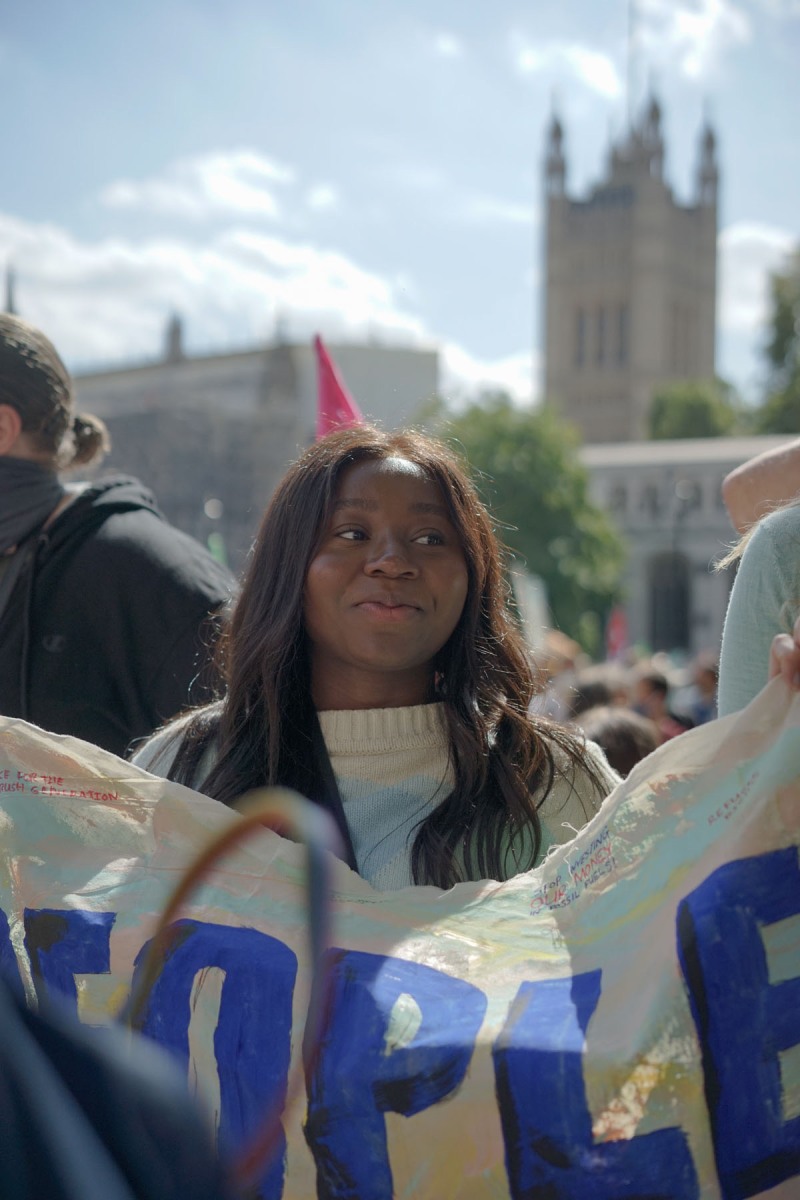 Daze can re-trace, in detail, the very first time she fell in love with nature all the way back to her school days -fascinated by the ecosystems that surrounded the grounds. Since then, she has turned her passion for the world around her, and subsequent hatred for how it has been cared for, into her much-needed work as a climate activist.  As the climate emergency increases in urgency, we chat with Daze, off the back of this year’s COP 26, about her hopes for the future and how both social justice and climate justice go hand in hand!

How did you start working in climate justice?
When I was young I lived in North London and my family lived below the poverty line. So living in a world that shows system failure makes you realise how bad it is and also gives you a level of empathy. So that stuff, and also my mum being a powerhouse laid the groundwork for the work I do today. When I was around 10, my mum started her restaurant and made us very middle-class within a year. There was this very brisk cultural change, from moving from a 1 bedroom flat with 5 people to a 5 bedroom house, and being whisked off to boarding school.

When I was at boarding school, which was in Lincolnshire, this is where I fell in love with nature. My boarding house was very small, and my house parents really loved nature. At boarding school, we created a garden where we would grow food, and then we moved on to having chickens. We had 15 at one point! We also built a pond and watched an ecosystem flourish. Coming back to those moments, they were the points that I started loving the environment.

When I was around 16, I came back to London, and I became fairly ill with respiratory issues. I had them when I was younger, but they came back. This is when I realised that something was up. I went on google and found out about air pollution and the effect on ethnic minority communities and communities of the working class and our city.  I found out that this pattern of neglect was not specific to this city, or air pollution but something a lot wider. It’s something that is happening on a global scale. For so many years I did nothing because I was so paralysed by fear and grief and sadness. I did things as an individual, I went zero waste, I went vegetarian, I gave up fast fashion than when I was in uni my friend told me about Extinction Rebellion and yeah, we went to a meeting. We were both anxious, and then a lovely lady called Amy came out and told us we could come in and comforted us and made us feel comfortable and then that meeting changed the course of my life forever. It made me feel comfortable grieving about the climate and being vulnerable and knowing that I had a community that could hold me. That was quite radical.

What does a day to day look like?
It’s varied and can be quite manic. I do lots of different parts of activism, so lots of Zoom meetings, lots of attending protests, lots of helping out with the organisation of protests, and for all my bill paying jobs, I’m quite lucky that they fall into the stream of the work that I do, and they are activism themselves. I am the creative director at a media startup called earthrise studios, where we aim to tell stories around the climate crisis and make it more accessible for people to process these feelings, and feel empowered to go into action. And then I do lots of freelance work, which takes many different forms. Whether it’s a consultancy with NGO’s about how they can include social justice and climate justice in their work, same with companies and corporations and also doing lots of weird different bits. At the moment my main consultancy gig is working with a theatre about how they include degenerative cultures and climate justice. It’s very varied! Sometimes it’s quite traditional, and sometimes it’s a bit whacky!

‍What would you like people to know about climate justice and climate change?
It’s the recognition that our social ills are deeply intertwined with one another. The only way we can truly get out of the climate crisis is by addressing it holistically from the roots of the problem. The way I see it, especially given England’s history, I pinpoint when the climate crisis went a whole lot quicker than it would have otherwise. The beginnings are the enclosures that happened, the theft of land from the public that began the lack of connection to the land to the soil and to the earth, which lead us into capitalism because people needed to be able to access the land that they needed to feed themselves, so they had to go into wage labour. Wage labour, so many people were looking to use the land that they could end up exploiting one another. Exploitation carried itself overseas when capitalism needed to expand beyond the borders, and this led to colonialism and colonialism is another abuse on ourselves and also on the planet.

The climate crisis is purely a byproduct of the ways that we have learned to use and abuse ourselves and our planet. Learning to solve it involves learning to purge ourselves of these negative behaviours and come back into a way of being that is based on love, duty and care to ourselves, to each other and the planet.

Can you tell us a little bit about what you were up to at COP 26?
I hate the COP process. Every single year it brings people to a place of hope, and then our leaders disappoint us every time. The agreement that they’ve drafted looks pretty shit. Some people, like Christina Figueras, are saying that the current draft doesn’t even meet the 1.5 degrees that were agreed in Paris in 2015, and we aren’t on track for that! It’s extremely alarming. I boycotted the main event unless I had to be there, but what I loved was being able to do lots of talks and panels and have those hard conversations and mingling with people after, and hearing about people’s experiences from all across the world and how people are being impacted. Hearing these stories makes you angry, and especially angry at the inaction that is happening. This is what I try to harness in my talks, to get people fucking angry! Leaders have known about the climate crisis for the past 50 years, and we have yet to see proper radical action.

One of my favourite things about this year was watching my friend Marvina, who’s a Black Lives Matter activist and an indigenous leader come together and dance. When would you ever see a woman in African attire and a man from Native American dancing in the streets together to reggae! It’s only at protests do you see that real collaboration of humanity. That’s the best part, meeting together, having those connections and finding ways to encourage change in the world.

What are your hopes for the future?
I hope to create some form of meaningful change for the next generation. My friend and activist, Ann Roderick, is someone who has inspired me about how to do activism. She said don’t have any idea about what success could be, just do what feels right and I think that’s what I aim to do for the next couple of years. I’m going to do what feels right and is honest to my intentions in this world.  And generally, I hope they stop stalling climate action. I hope they realise that investing in all this fancy machinery is not going to save us from this crisis.  There is a place for technology, but the greatest technology is right beneath us.